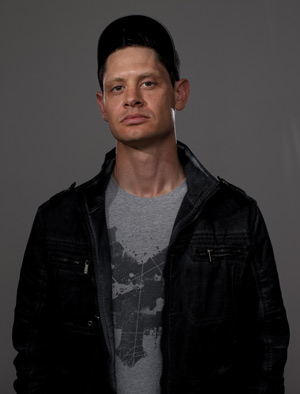 There are many things that can be said about many men in this world.  We as humans strive to be reputable in remarkable ways as we journey through this life.  Crucial’s story is simple, yet by the mighty hand of our Lord, his life has been made remarkable and quite interesting.

Crucial was born Matthew James Slyman in the city of Birmingham, Alabama where his father was completing medical training and residency.  Upon completion, the Slyman family moved to and settled in the small town of Lexington, North Carolina.  Matthew; or “Crucial” was at the tender age of 2 when the move occurred so naturally he claims Lexington as his primary “stomping grounds.”  Crucial grew up in a Christian home nestled in a nice neighborhood with safe roads and sociable neighbors, and was blessed with wonderful parents who prayed for him every single day.  He began studying music at age 9 when he took interest in piano.  “My dad used to play the piano ALL the time and I just HAD to learn how he was making all that beautiful noise.”  Crucial soon discovered his own creative ability and God given talent as he began composing his own songs after just one year of piano lessons.  “I wrote my first piano song when I was 10.  By the age of 14 I had composed over 20 others and recorded 15 of them.”  Crucial probably would have composed more than that if he hadn’t been distracted by the rap mix tape he produced at age 12.  “It wasn’t really anything big.  I just made a cheap boom box recording of some beats I had produced on my electronic keyboard.  I wrote out rhymes for about 10 songs and recorded them on tape.  The songs were basically just about middle school life; running through the halls, cartoons and video games; you know, just quirky little gumball-bottle cap stuff.”  Crucial also became involved with other musical instruments such as clarinet, saxophone, bass guitar, acoustic and electric guitar…and was at one point the bassist in a rock-alternative band that performed various gigs around North Carolina.  “I have a deep appreciation for ALL genres of music.  I love rock, rap, electronic, jazz, blues, country, Broadway musicals; and have actually composed music for several of those styles.”

So as you can see, Crucial isn’t exactly your average street kickin’ gang banging ghetto-thug who attests to slinging dope and robbing stores as a young boy.  “Actually, I was just a skinny little kid with ADHD, who got picked on for having big ears and skin whiter than baby powder.  I spent a lot of time day dreaming too.”  But as he grew and progressed through High School, Crucial became a guy who walked through the halls as his own person, avoiding cliques and pretty much just keeping to himself and what few friends he had.  Crucial attended the city school which was very culturally diverse, as he had friends and acquaintances of all different races and cultural backgrounds.  Crucial did well in keeping his head above the water through High School, though many times he could’ve gotten in a lot of trouble.  “I was sexually active…and I developed some bad habits with alcohol, cigarettes and vandalism.  I’m surprised I actually graduated High School without catching an STD, DUI, or getting locked up in jail.”

While Crucial began attending a local community college, drugs became a big issue.  Crucial started by smoking a little weed here and there to experimenting with hallucinogenic drugs, cocaine, pills and so forth.  Crucial even began to hustle a little and would break into houses, steal merchandise to pawn and buy drugs with, etc.  “I was on the move between 5 different towns and had turned away from my family.  There were nights I had to sleep in my car out on the streets somewhere.  It was NOT fun.”  Crucial eventually dropped out of college, quit composing music, and had pretty much just given up on all the dreams and goals he once had.  Not to mention, he had lost the respect (not love) and trust of his family, burned a lot of bridges, devastated the girlfriend he had at the time, took advantage of everyone he knew, and broke way too many promises to feel like he could ever be worth anything again.  Drugs, streets, and the ways of a dirty man began to be all he knew and all he cared about.

Then came that one fine day; the day that Crucial decided he was sick and tired of the life he had been leading; the day that he finally realized he had hit rock bottom and could not sink any further into the downward spiral.  It was on that day that Crucial meekly and wearily lifted his head up to the sky and called upon the One we all know as the Lord our God; the Alpha and Omega, Beginning and End, Maker and Creator of Heaven and Earth.  Crucial cried out and asked his Heavenly Father to pick him up out of this ditch and place him on his feet again so that he may know how to live a better life.  Crucial soon gave his life to Jesus Christ and began learning how to live for Him.  “It’s like I was a baby again and had to start from square one.  Gradually I became disciplined, more responsible and trusting.  Gradually I earned the respect and trust back from my family.  Gradually I learned how to be a man and gained wisdom to know exactly what it was God wanted me to do with my life.”  The Lord spoke to Crucial about using his experiences and gift of music to reach others and spread a VERY important message to anyone who is willing to listen.  Crucial was then called out into the wilderness to work with at risk youth.  “I lived outside in the woods with these boys for five days a week at a wilderness treatment facility; working with them, giving advice, and listening to their life stories and struggles.  I was also able to keep a journal of my experiences and reflect on my own issues, as well as evaluate what kind of person God really wanted me to be.”  Crucial worked at the treatment camp for almost 3 years, gradually piecing together a recording studio, and establishing himself in the ever growing music industry.  In October 2004, Crucial opened up “Slyworks Publishing” music publishing company through BMI in Nashville, TN and established Rock Solid Records as an independent record label in Charlotte, NC.

Fast forward to 2017.  Crucial has now released 9 albums, performed for thousands in over 200+ events and has traveled and spoken at multiple churches, conferences, festivals, prisons, retreats, etc.  For more than 12 years, he has been a serving member of Central Church in Charlotte, NC.  He’s married.  He’s still in love with God and still persevering in his faith in Christ.  He continues to go where ever he is called to bring solid, truth-filled messages through his artistic abilities.  None of this could have ever been possible or accomplished had it not been for the merciful, saving grace of God, which is found in Jesus Christ.  “That day, when I swallowed my pride and began trusting in the Lord, I had no idea that this is where I would end up.  I just knew that I wasn’t going anywhere fast.  I had tried everything; nothing else worked.  It takes a lot of guts, discipline and humility to live for Jesus Christ, but it has awesome and immeasurable benefits…and once you take that step, you’ll immediately know that without Him, nothing else matters.  There is absolutely nothing this world has to offer that can fill a person with that wonderful peace that exceeds beyond all understanding; and even the very least of what God has to offer is worth more than what the entire universe could ever afford.”

It is acknowledged by us time and time again that we are what the Lord calls “fishers of men”.  Music is only the bait.  A certain kind of bait to reach a certain kind of fish.  Crucial brings some of Rock Solid Record’s finest bait in hopes of fulfilling his calling to build upon the Kingdom of God and to encourage and strengthen other believers.  The message is “crucial”. We are living in crucial times.  Crucial times call for crucial measures. . .

Your cart is empty
Visit The Shop